Hi to all blog fans and new Film makers,

This week’s blog comes after the London riots that have affected us all in some way. Luckily we have avoided any trouble as we are away from all the hustle and bustle and noise of the main streets.

Although our recent client from Brighton seemed to have missed the memo about this and brought her own peaceful demonstration to be filmed at the Studios. The piece was a charity film about corporations and their hold on the public eye. Takes of the below shot were kept to a minimum as we didn’t want the friendly locals to hear the (albeit friendly) shouting, coming from the Studios opened roller door (perfect drive in access by the way!) 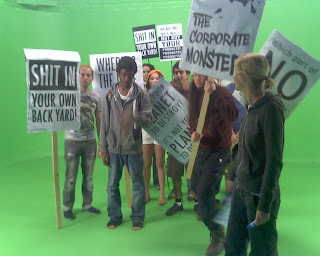 Also at the studios we welcomed Joseph Chaganiza. His day job is being a chef for the Queens guards, by night Joeseph produces his own tracks and has now released a full blown debut single. Joe (sounds like a British Jay Z) has written a 1930’s inspired love-rap with glorious floral blooms and animations being added to his green screen shoot. Joe was keen to edit the footage himself and with no prior experience this can be a perfect way to keep your costs down and work on it as a labour of love.

Also this week. We saw the fruits of Lemonade Money’s labour on Channel 4 at 12.30am Friday nights.