'Ive been a fan since the bloggining'

We start with a look at a local band who are starting to make big waves on the mainstream circuit. Who are they? The one and only (well 2 and only) Aluna George (Band Members are Aluna and George so sorry If I let the cat out of the bag on that one guys but I'm guessing that will be one of the questions you will get asked alot from journo's with your success so you'll have to just get used to it I suppose!!!!!)

Aluna is a local girl who made her first few videos here at Camberwell Studios. People are starting to rave about her and her synth junkie band member George. You can't turn on a Radio station without the name being mentioned. Take a look at some of their videos below....
In the next few blog's we will look at our previous music video clients and ask the question. Where are they now? Most artists will be rising steadily on playlists around the country but some of them will have not given up the day jobs and given up on the dream.

Onto sadder news now. Please have your tissues ready...

It is with great sadness I bring to you the news that all of our goldfish from the below blogs, have all died.

R.I.P
Marylin - Flushed - Beautiful gold and white fish with a beauty spot. She was the 1st to go. She put up a good fight but unfortunately swim bladder disease got the better of her. She slipped away quietly
The twins - 1x Flushed 1x buried - The silver fish who were so alike it was difficult to name them individually. the male of the 2 lasted the longest and was found dead this morning
James - Buried with his sister in our garden , May ( Our longest serving fishy friend) James has seen many a shoot come and go from his watery residents. 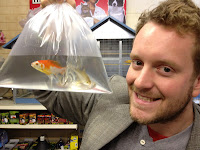 This edition of the bog has some dark undertones to it but please don't worry. Camberwell Studios is Still London's Brightest Film and Video facility so bear with me in my fishy mourning period. I will adopt the goldfishes greatest weapon to aid my grieving. I'll try the 'Ignorance is bliss' approach, which are thier terrible terrible memories and then soon I will have forgotten about them. Hang on... what was I saying : )

Those of you waiting for a lighter note to this part of the blog will have to wait. Below are some great images for you that show some of the darker shoots we have here. The include our prize draw winner who scared a little girl (shooting a fluffy pink Barbie Toy advert in Studio 1) with his music video mask while posing for the prize draw winners picture below. 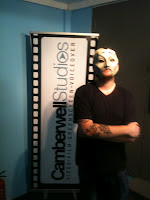 They are looking make a music video with their prize along the same dark lines as the below images of a set build shoot in Studio 1. The set was a chair-bound character haunted by the grammaphone he cannot touch that brings up representations in a ghost like form of a small child. See pictures below. 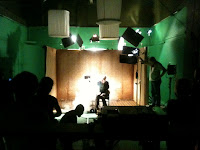 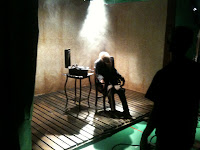 Along the dark and blackout theme this week we present a collection of pics of our darkest shoots. In a true  magazine advertorial, tenuously linked - style it co-incides with the screening of the film trailer teaser of 'FEST' a gory British horror drama that premiers soon. Continue to read with the lights on.... 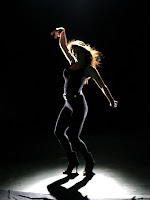 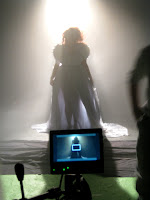 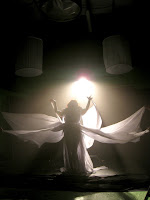 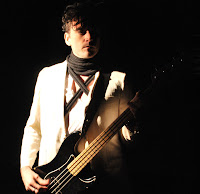 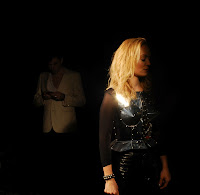 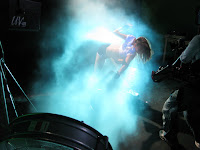 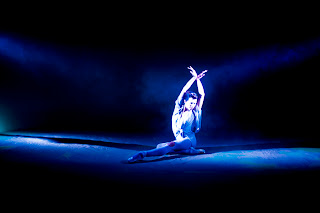 Some prize draw info now.
We are still waiting for our prize draw winners to come back with their finished pieces but Jamaine (pictured below) who made his music video a few weeks ago is among the front runners to complete his edit first.
In the next edition of this blog it will be a special Prize draw winners blog, showcasing all of the winners, their work, their finished videos (hopefully) and their moves for the future. 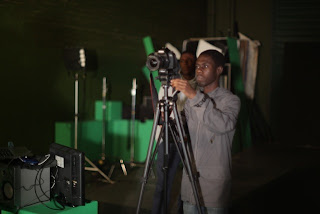