Babies, babies everywhere. My fiancées friends, my friends, ITV. Everyone's on about, having, had, is a grown up version of... Babies. Maybe (baby) its this time in your life where it all starts happening? Maybe theres something in the water that all makes us go breeding mad. Will the weather have an adverse affect on this? Will the heat be off in some relationships or will the longer, colder, boring days snuggled up on the sofa (in front of the TV, so maybe in my case this doesn't help the baby-making process) create more little mouths to feed?  In the case of ITV's new series examining babies, it is a ratings winner but a logistical, sicky pain in the be-nappied bottom. Generally working with kids has its pitfalls, the working hours, the demands on the crew and the small chance of a perfect take all combine for some very creative directing techniques.


Yesterday, Studio1's crew were trying to think of ways, ( and mostly failing) to get a 3 year old girl to look into the camera. They could have just as well told her not to look into the camera as she was looking everywhere but. Last time we had a diminutive diva like that in the Studios was during music video for **** ******(that would be telling!)


We wish them all luck in the production, their children's development and most of the crew who received an unwanted crash course in behavioural science.


We move onto other creative ways that directors get the most out of their talent. Drive Productions had an action packed day of stunts, balls catching, high platforms and dancing that really stretched the possibilities in the space and the casts abilities. This happened during one of the rare hot days where we were able to open our big shutter doors to let in some fresh air so the riggers and camera crew could nip out for a cigarette but still be on hand to deal with anything. Studio 1 is best used in this way (weather permitting) and can be used as a great production area for set building, storage, art dept work and much more. 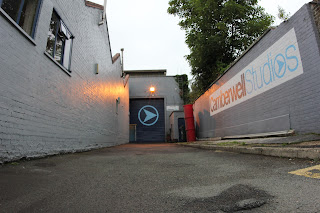 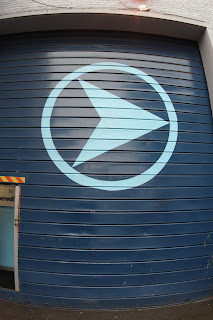 Large shutter is great for deliveries, kit and crew access and is perfect for long, hot shooting days. The crew can nip out for a quick fag during takes and still be part of the action. Shooting in this way has shown some great results


See our selection of other pictures on our Facebook page here:


Drives production was for the Olympics. It is to be played on a huge screen for all these lovely new visitors to see in all its glory. Camberwell Studios have been in touch with Film London who have excellent contacts, advice and projects to do with filming in London and for the Olympics. Although Camberwell is not near the Olympic site we have been placed on a list which allows international production companies to book soundproofed studios for all manner of reasons. Studio 1 is also great for athletic video projects as its a large space. Not quite enough for a 100m dash but big enough for the triple jump world record!


The Olympics plus many sporting events have shown some fantastic high speed, slow motion camera work so it was very interesting to see green screen high speed shooting with Chromacode Studios. James, the director, was using a Panasonic AGAF101 and shooting at 50fps. When used with an Adobe After effects plug-in called Twixtor, it gave impressive results. Using Stage Electrics bank of 5KW lamps we filled the space with light and let the performer really test the set-up with lots of fast dance moves.


We have excellent news for your readers and clients. We have been working in collaboration with Radar Music Videos.


We teamed up with Radar Music Videos for some mutual promotion. If you're a music video director, check them out. They publish live music video briefs from record labels and independent artists, all have budgets. Directors pitch to make those briefs - there's a small monthly fee to subscribe. More details here: http://www.radarmusicvideos.com/home"

In collaboration with Radar Music Videos we are proud to offer some huge discounts to really squeeze the most out of those pitches!

Enjoy a huge 20% discount on Studio 1 for any purpose.
Perfect Studio Space for Music Videos, Cars, Set Builds and Corporate ad’s too with lots of room for production staff to connect to WIFI and be part of the production process.
Painted in green as standard we can easily and quickly drape the floors and walls in black. Repainting (by arrangement) to white is no problem (but usually an overnight job).
And we’re FLEXIBLE too.
Over the past year some of our productions here have included Pyrotechnics and fire (within reason!), Water, Stunts and Animals.
We pride ourselves on a friendly relaxed approach to helping every production get the most from the day. This is a great value film and studio space for hire in central London and even better value when booked exclusively through RADAR MUSIC VIDEOS.

Some prize draw news now. We are still waiting on both Sarah's edits (Jan and March winners) to come through but we have been assured we'll be the 1st to know. Beto, the April winner is still working towards an August shoot as is our May winner Jamaine.


A brief word from Beto who will be choosing a shoot date very soon.


''I am a Mexican writer/director who came to the UK to learn how to make films in the traditional way... by shooting on actual film. In my time here, I have fallen in love with the culture and people of this country (and yes, it's temperamental weather) yet my roots are tattooed onto my skin.

I singed up for the Camberwell Prize draw with no expectations and I was deeply moved to hear I had won. I was proven wrong about not having any luck at all. During my first visit at the studio I was welcomed by its amazing team and their willingness to help. Opportunities like this don't come often, if at all, so I am very grateful to them all.

As for the script, I am tiding it up to make it two or three pages max.
The general idea is to make a promo for 4am Films to go on the website, which will have a light tone and will feature some of our past characters (a King, a zombie, a wrestler, a cartoon). The setting will be a lot like a job interview with these people on the look.''

And finally.... Agile films have released their Alt J video talked about int the previous blog...

That's all for this edition. Many thanks to all my readers and its great to know that the Indie Membership scheme is getting alot of attention and I look forward to hearing more from you.