Hi Prize winners and readers of  all of our Blogs,


Last weeks blog detailed Sarah's plans for her January prize win (see here for her blog/bio/prize details)
Sarah has completed her shoot and is now editing. Sarah came in for a pre-production meeting, discussed the storyboard, style, tech elements and logistics ready for her shoot the following week.
This process gave us a great insight into the challenges of planning the shoot and It also gave us some good ideas for the February winners project too.


Sarah decided to use her Free Studio Day Prize as an opportunity to make a music video far a song called 'Reaction' for an artist. Roberta's  Facebook page can be seen here: 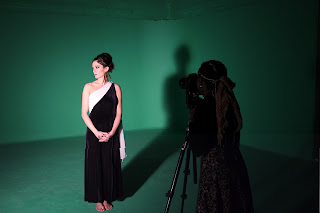 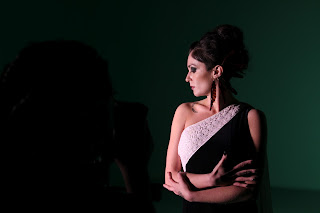 Roberta with her single ' Reaction'


Sarah used studio 1 and shot in monochrome and had a big emphasis on shadows and light in high contrasts.
Using 2x 2kw Fresnel's we managed to created angular lines and depth to the space in Studio 1.  When we added our smoke machine it gave the room more dimensions and levels for the dancer to move in.
The whole crew got creative with flashing images, back lights, moving lights which is all part of the prize. See kit available to the winners, and all potential clients, here. 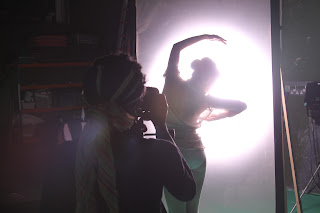 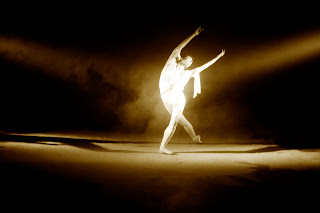 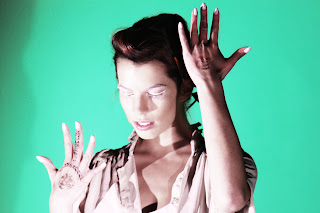 Dancer: Alize Biannic. Alize has skills in contemporary dance, ballet and other art forms.
She is a fantastic talent and her Facebook profile can be seen here. Click on her name above link for her acting and modelling roles at Starnow.

This was our 1st prize winners shoot and Sarah and her team were really lovely and we hope that this prize, along with the other winners shoots, give them a piece of work to be proud of and raise their profile as film-makers. Sarah was a great director who had a clear vision, flexible work ethic and an extremely creative eye and we all wish her the best of luck. We are sure Sarah was thankful as she made us a beautiful Camberwell Studios logo out of broken mirrors and tiles. It will take pride of place in our lobby area for all to view! See below:

A word from our winner:

''The idea for the film was based around the space we were given to work with
I have a keen interest in performance arts and immediately decided to produce a film featuring a lengthy dance sequence and this combined with music led to us producing a music video working with two talented artists, both Alize and Roberta DeFrancia''
''The final video will show strong links between the dance sequences and the vocal performance as the narrative reveals the dual personality of the character''.
''The full music video will be kept under wraps until the summer release of the single on iTunes but for now we have put together this featurette which in itself has its own standalone narrative and works as an individual film.

''We had a fantastic time working at Camberwell Studios and received hands on support from the studio Manager, Sam Parkinson who is very creative and has a great eye for detail. The mosaic piece is just a small way of saying thank you to the studio for this great opportunity.'' 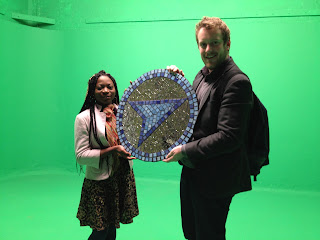 So that's the January winner. Hopefully on her way to building her portfolio more. Onto our Febuary winner
Neil Genower, who visited the studio to claim his prize. 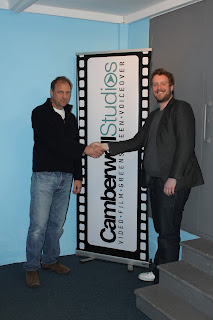 Neil claiming his prize. He was happy to win!, just caught in him in the wrong moment in time. Think its when I told him that the January winner made us a present!!!!!!  ; )

Neil has been a photographer for years and has since turned his hands and his DSLR lens to shooting videos. He mentioned he has been in the business for years and winning this prize will be the 1st time he has created his own piece and relished the opportunity to use the space as he saw fit. We talked about what elements the prize included. We offer the winner a Studio 1 or 2, pre-lit to requirements, camera/operator, sound capture, dolly/track, mini-jib and a studio assistant to help them get the most out their day. Neil has a few ideas, one is a music video, the other may well be a silent movie involving a round table poker game. The film will show the detailed expressions of the players, subtle body languages and tells. All sounds very exciting and the next blog will reveal all.

March's winner has also been announced!!!!

Sarah Bick is popping into the studio on Monday 16th to discuss her prize, take some pictures and book her Free Studio Day into the calendar. From there we will do a pre-production session to create a package that suits her. Info on Sarah below: 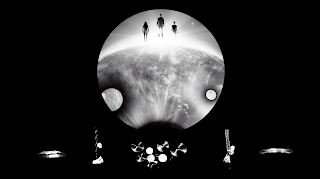 Sarah is a Production Designer & Filmmaker, working across the creative industries. With a background in film, events and art direction, she currently works in the art department of feature films. Recent commissions include corporate film direction for Chemistry Group, high street re-gen design with the Architecture Foundation, and music video direction featured on NME. Her moving image work often uses miniatures and compositing, and she writes and makes visuals exploring the cinematic. Sarah studied Theatre Design and Film at University of Arts, London. 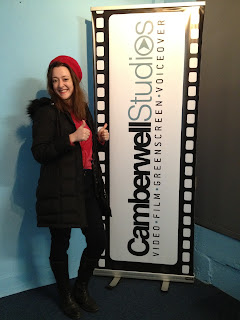 We will blog again when Sarah Peaces video is finished. For now please see the teaser dance sequence trailer here

Please continue to enter the prize draw and send us your ideas as to what you would make with the Prize draw worth upto £1000!