Hi there,
This week I have been racking my brains to offer you faithful readers a deeper glimpse of Studio life, the stresses and strains of 12 hour music promo days, tantrums, binges, badger balloons, green screen tech info and an exciting new prize soon to be announced. We welcome Lindsey to the Camberwell Studios team. An American Student working as an intern. Lindsey would love to make it in Hollywood and is looking to develop her skills in both production and marketing.
Our office staff have all been trying the American Accent to make her feel at home but at some point, our accents, lie between Scotland, Newcastle, Boston and Russia. Poor attempts all round. Her English accent is great though. Much better than all of ours put together. Our office consists of: A Russian, a Hungarian, Vietnamese, Danish-Hungarian gypsy Jew, a Jamaican and a cockney wide boy. We are definitely multi-cultural!
So.. I walk into our kitchen the other day, a rocking looking dude is there making a tea for himself, long hair, grunge beard. All in black, bit beardy. It may well be another roadie, dropping in kit for band shoot in Studio 1.
As usual, I started to ramble on about something.  The weather probably....
‘’Where you based then mate? London? Don’t cycle in then do you?’’ ...’’yeah, I had a right nightmare coming through Elephant and Castle roundabout..........!’’
‘’Sam.. (said a voice behind me!)
I turned round.....
.....It was Mike Goodwin, our Studio 1 Rock Promo client.
‘’let me introduce you...This is Adrian Smith... from Iron Maiden’’ ...
Black adorned roadie extends his firm grip into my hand. I am aghast. He will not have cycled in, he would not have braved the rain. He does not need the tube. He definitely won’t be cycling on the Elephant and castle roundabout at 7am. He won’t be happy that I described his beard as grungy. Not only is this not an acceptable noun. It is not something he will ever have been associated with. (Grunge is American and is probably derived from Maidens great work!) 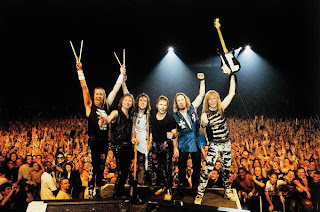 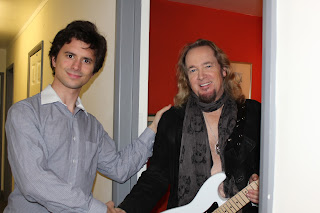 Here Adrian is, with our resident editor who seems to have a knack for getting into celebrity pictures.
Pure and simple, Legend. Even more so to see a slightly soggy Adrian Smith, hood-up, coming back from our local shop near the end of the shooting day. We wish him, Mike Goodwin and the rest of the band the best of luck in their future projects.
Also this week saw a Dominic Littlewood checking our crevasses for shoddy workmanship or rip-off plumbers! (see previous work Cowboy Builders)
Luckily our lean-to is built to the highest standards and we didn’t get ripped off. Dominic was working with Flame TV for a new series exposing a range of benefit fraudsters. These individuals were claiming money for disabilities then being caught on CCTV skiing, wrestling on working out in the gym. Naughty Fraudsters!

There was a lot of pre-production that went into this green screen shoot. The Production Co was trying to establish what equipment to shoot on. The BBC have an approved camera list which applies to most other broadcasters. This was a great learning curve into what camera work for green screen.
From conversations and general research, including a testing session around the booking, they went for JVC's Pro HD camera which is best suited HDV chroma keying applications. Its native resolution chips combined with progressive instead of interlaced scanning were used with their chroma-keying in this instance. JVC's Pro HD range offers the ability to pull a 4:2:2 uncompressed signal live from the camera allowing you to key without having to go through HDV compression. We generally use progressive for our online webvideos but for broadcasting it is best to refer to the broadcasters requirements.

As a lighter and more colourful subject we welcome Back 2 Sides TV with their excellent and somewhat warped, Ballooniverse. A collection of Balloon animals and characters intricately made and composited into a luscious and fascinating world for a new Children’s TV series. Unfortunately we had to turn our heating down in case these balloons deflated. UK readers will understand why this is bad. My lonely follower in Dubai will not. 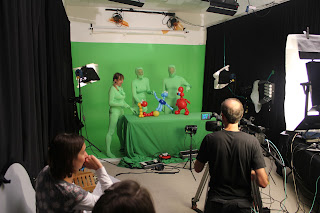 Also new this week we have been developing our new and exciting prize for the studios. Details are hush hush but it will be a great opportunity for aspiring film-makers. Stay tuned for more details!
See us at Production base Freelancer of the year awards where we will be talking to Freelancers and Professionals alike. Last time our Music Video producer here at the studios, Tai, made lots of friends and contacts, ended up in a bar with a whole host of freelancers and industry professionals, and generally provided a high level of Camberwell Studios customer service that night.